Announcing: Poesy, a nosegay of prose

In creating, the only hard thing is to begin; a grass-blade's no easier to make than an oak. ~ James Russel Lowell

I am so excited about what I have to share today that I hardly know where to begin. This news has been over five years in the making. And now that it’s finally time to let it out into the world, I’m tripping over my own enthusiasm.

It all began in the summer of 2008. I’d hit a terrible slump with my writing and would sit at my computer for hours at a time, typing insipid sentences and immediately erasing them. I felt like I had lost my identity as a writer. Worse than that—I felt like I had never been a writer in the first place. Who was I kidding? Who did I think I was? And who on earth would ever want to read the kind of books I wanted to write, anyway?

It went on and on, for weeks. I remember one sweltering afternoon in particular, demoralized by the heat without and the wordlessness within, wherein I threw myself on the sofa in a full pout of despair. “I must’ve missed it,” I half-prayed. “For some reason I thought I was a writer. But I’m not. I don’t have Story running through my veins. Or if I ever did, I’ve lost it.”

I had an appointment that day, so I heaved myself up off of the couch and went downstairs in a black cloud of melancholy. It felt like a death, and my heart was cold with the sorrow of it as I stood before the mirror brushing my hair. Not a writer after all, the words scorched my weary mind. And then, something magical happened. Even as I stared into those despondent eyes before me, a running commentary wakened in my head. It was a voice describing how I was feeling: the awful deadness of my discouragement, the misery of my misunderstanding—in vivid words and in third person.

I threw down my brush and took the stairs two at a time, flinging open my laptop before I’d even pulled out my desk chair. I spilled the description onto the screen, writing as fast as my abysmal typing skills would permit. And as the words grew under my flying fingers, a character emerged. (I was late to that appointment, by the way.) By the end of the next week, I had a story. Another followed, and another. I greeted the process with curiosity, seeing these people suddenly in my head and then following them around over a dozen or so pages just to find out what would happen to them.

The whole thing was so fun it just couldn’t be real writing. Where was the agony, the hair-pulling, the angst? (These jolly friends save their presence for the editing process, as I later learned all too well.) But I couldn’t help myself. I just kept pursuing these little whiffs and signposts of Story—some buoyancy within seemed to carry me along—and, before I knew it, I had the makings of a book. The vision grew with the collection, and when I reached ten stories I knew, instinctively, that I was done.

I wrote this little book purely for joy, out of the most idealistic sensibilities of my heart. There were times I would actually have to get up from my desk and walk off the trembly feelings of happiness that made my hands shake and my heart skip a beat as I wrote. It’s not best-seller material. It’s not “marketable” or “mainstream.” It has no message, save that Love Exists and Beauty Matters, and it has no agenda. If anything, it’s unapologetically old-fashioned, very much in the style of my literary heroine, Lucy Maud Montgomery. It was the book I wanted to write five years ago, and once I got out of the way of myself and quit trying to write what I felt was expected of me, out it came.

I knew that a book as gently outdated as mine would require special treatment, and as my imagination had already quite run away with me, I gave in and gave it its head. It was out of this untrammeled flight of fancy that the dream of Low Door Press emerged: whole runs of books made entirely by hand. I longed to create something that was simply as beautiful as I could make it, start to finish, and, somehow, this book I had secretly (and accidentally) written seemed the perfect candidate. Kilmeny of the Orchard was the first grand experiment (I’m still dazed and delighted at the way she was welcomed by all of you!), and all the while I’ve been working away behind the scenes to bring my own book into the world in accordance with the dreams I first dreamed for her.

Let the beauty we love be what we do; there are hundreds of ways to kneel and kiss the ground. ~Rumi

All these years I’ve been editing compulsively, revising, rewriting, undoing and redoing. Kind friends have looked her over and given me feedback, and a year ago I hired a keen-eyed and kindred-spirited editor to give my girl a final spit and polish. I finished the typesetting last summer during my online sabbatical and two weeks ago, after one final (agonizing!) export to .pdf, I took my little book to the printers. I was so excited (and a little flustered) that I left the house without any lipstick, and by the time I walked out of the shop with a proof in my hand and an order irrevocably underway, I felt rather dizzy. To be honest, I was totally unprepared for the shining excitement that snatched me up and has held me ever since. My book—my very first book—was being printed! After all the agonizing and obsessing, the scrutinizing of fonts and the millions of exports, after learning to use Illustrator (and learning to use InDesign all over again as I’d forgotten everything I knew)—this dream was becoming a reality!

Now that my book is in my hands and the binding is underway, I wanted to include all of you, dear readers, in the final stages of this project. Besides, I just couldn’t keep the secret to myself any longer! I though it would be fun to keep you posed periodically, in words and images, on the status of this second title in the Low Door Press library. I’m not ready to announce a release date as of yet (there are too many imponderables attendant upon the hand-binding process), but my hope is to have the first run ready by mid-autumn.

And so, without further ado, it is my great pleasure to announce: 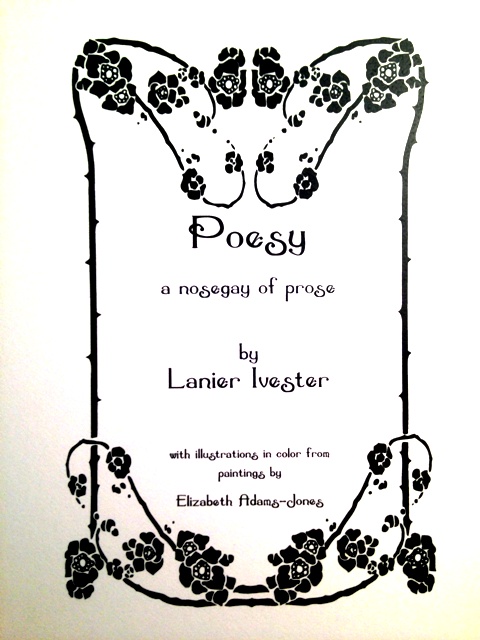 Poesy is a collection of love stories, some contemporary, some slightly historical, all with an old-fashioned sensibility. It is a Valentine, of sorts, a personal declaration of sentiment and a bouquet of gentle thoughts.

I am employing a somewhat different method of bookbinding on this particular project: whereas Kilmeny was essentially case bound (the text block created separately and the cases inked and debossed on an antique engraver’s press before assembly), Poesy will be created in the even older style of hollow-backed binding. This will allow for slightly more flexibility in the spine and a chance to try my hand at individually gilt-stamping the titles as the final step in the process. My amazing sister has once again leant her talents to this project and created four stunningly beautiful original illustrations, in addition to the full-color cover art. She has taken the pictures I had in my head when I was writing and made them a reality to grace the pages of my book. I’m absolutely stunned over how lovely they are. Such a perfect complement to the pale green book cloth I’ve decided upon.

So that is my surprise, gentle readers. I would be so honored if you would accompany me on the final stages of this journey. I promise to keep you updated on Poesy’s debut.